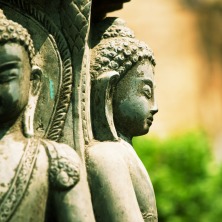 “Keep your heart clear
And transparent,
And you will
Never be bound.
A single disturbed thought
Creates ten thousand distractions.” ~ Ryokan

I recently came across this poem and wanted to share my thoughts about it with you.  For me it holds some important life lessons. It was written by a Zen Buddhist monk who is best known not only for his poetry and calligraphy, but also for his refusal to live according to all the standard characteristics of a monk.

Given that component of Ryokan’s life, this poem takes on new meaning for me. It’s a meaning that, I think, is extremely relevant to some of the most important truths I try to convey to my clients and readers.

On first pass, the poem seems to be a pretty explicit description of successful meditation, during which one keeps one’s mind and heart completely clear or transparent. To allow a single thought into this perfectly still mind is to produce thousands of other thoughts rippling outwards, destroying the perfect stillness.

And yet in life, Ryokan was never one to be bound. He decided to train at a Zen temple on his own, even refusing the help of his family. He selected a particular master and worked to become that man’s disciple. Upon his master’s death (and concurrent with massive reformations of his order), Ryokan decided—for himself—to leave monastic life and become a hermit.

Even as a hermit, Ryokan was dedicated not only to kindness and generosity, but also to paving his own way (insofar as this was possible) by explicitly denying several assumed characteristics of monks. From, for example, not maintaining a strictly vegetarian diet to forming a loving relationship with a young nurse in his final years.

Ok, but why is all this relevant, again?

Well, what if we interpret Ryokan’s poem slightly differently: not as an explanation of meditation, but as a plea for freedom in individuality and difference.

If you ‘Keep your heart clear / And transparent’, then ‘you will / Never be bound’. For Ryokan—and for us—inner transparency is a means of rejecting the interpretations, demands, assumptions, etc. with which others burden us. By embracing and doing everything in our power to hold onto this transparency, this self-truth, we become authentic.

Ryokan lived and worked under a series of rules and expectations explicit in his every action—meaning that everything he did against expectation was a way of claiming his authentic individuality. He chose authenticity through poetry, through hermitage, through loving a woman and occasionally drinking too much wine—despite all forces operating against him.

‘A single disturbed thought / Creates ten thousand distractions’. If we lose our authenticity—our true sense of self, self-alignment, understanding—then it’s all too easy to be crushed by the weight of external expectations telling us who others think we should be.

Now, maybe I’m reading too much into a very straightforward poem—but even so, Ryokan’s life can show us both the difficulty and the reward of finding, embracing, and refusing to stop living as our authentic selves.

Now it’s our turn to unflinchingly embrace our own transparency, to ward off even a single disturbance—to live the life that we and we alone can live. And to know that what makes us difference, makes all the difference.

How are you embracing what makes you different?  How are you being true to yourself, your inner voice and wisdom?  Maybe today is the day you truly take a stand for you.