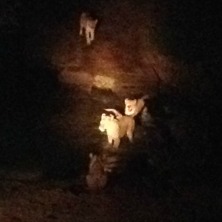 I recently returned from a safari in Madikwe, South Africa where I had the incredible opportunity to see some vital success strategies for life displayed before my eyes a pride of 6 lions. We had been tracking these lions every day. By day 4 of our safari our ranger knew it had been days since they had eaten so we planned to set out in the early evening to find them and see if we could witness a kill but what happened was so much more remarkable and exhilarating to watch.

We set out to find our majestic pride of lions with our ranger, Mark and our tracker, Gummy at about 4.30 in the afternoon. With not a hint of where they could be on the vastness of the African plains and after two hours of the most impressive tracking we saw them emerging from the bush. The sun had just set and the air quickly began to chill.

In single file they came out from the bush, led by the male – followed by two females and 3 cubs. The focus and intensity in their eyes that was absolutely palpable and quite frightening. We silently watched as the crossed the path immediately in front of us. Tonight they were going to eat; there was no doubt about that!

The female lions began to prepare themselves for the night ahead – they sharpened their claws against some nearby trees and stretched their jaws – they would be ready to kill tonight. And then they slowly, gracefully and very intentionally moved to the foot of a nearby bridge which our ranger explained they would have to cross to find food.   We followed closely behind them.

But there was one problem – a raging river flooded the bridge. Yet as they huddled together looking to the other side there was somehow no doubt they would cross that river. You could literally feel their determination in the air.

And then one by one they ran across the bridge despite the high water levels. First the male, then the 2 females and then 2 of the cubs. All safely on the other side and in an instant disappearing into the night.

But one 1 cub remained behind, clearly too scared to cross. The entire pride had crossed the river and was now out of sight and one young cub was left behind, literally crying out loud.

We all sat their stunned, devastated about the fate of this young cub. It could not survive on it’s own. How could they have just left it behind? Was nature the cruel? Every fiber of my being wanted to jump out the ranger and take the cub back to the lodge with us.

And then all of a sudden from across the river and out of darkness the two female’s lions and 2 cubs emerged – obviously very aware that one on their own, one of their pride was missing. And then without hesitation they all crossed back over the bridge and high waters. They immediately surrounded the young cub left behind, “talking” to it, “encouraging” it.

And then they began their second attempt at all crossing over again. First the 2 females went then the two older cubs – safely on the other side and again disappearing into the darkness on the other side. But again the young cub was left behind again. The young cub was not visibly distraught, crying out into the night. We sat in silence. Would they come a second time?

Before long the 4 lions emerged again, clearly trying to encourage the cub from the other side. But no luck so again they all crossed over the flooded bridge. This time they walked away with the cub, away from the water. Then back they came for their third attempt to all cross the river. No luck! Four lions crossed and the cub remained behind.

By now the cub was absolutely distraught. Pacing up and down, crying and not knowing what do with itself. We all wondered how many more times the others would try encourage it to cross the bridge before they gave up.

To our amazement they came back, not only a fourth time but a fifth time as well. But still the cub did not have the nerve to cross the raging waters flooding the bridge.

We were sure that was it for this cub. The others disappeared into the night. The night was dark and quiet expect for the whimpering of the cub left behind.

We sat and waited and watched…

And once again the four lions emerged on the other side. Again the crossed the bridge and surrounded the young cub, licking it, loving it, playing with it. And then they all gathered and the foot of the bridge. This was their sixth attempt. The two females lions crossed over and turned to look at the cubs. The two older cubs crossed – now all on the other side, standing and watching the young cub. And then with incredible courage and confidence and the support of it’s family on the other side, the little cub ran across that flooded bridge!

We literally all cheered out loud. Excited, thrilled and in awe of what we had just witnessed.

We quickly crossed over the bridge what we saw on the other side was again just remarkable. The male lion waiting there all this time and now the entire pride huddled around the baby cub, celebrating its courage. No one was left behind.

And then off they all went into the darkness of the night; I’m sure to enjoy a well-needed meal.

As we spoke about what we had just seen I could not help but see the parallels between nature and what I coach my clients on – everything that I coach towards I saw in nature and nature ALWAYS wins! Intention, preparation, focus, awareness, support, resilience, courage, stamina, influence….

So consider the following about your life – Are you consciously towards mastering all these elements in your life? Are you intentional in all that you do, do you consistently prepare and put in the work for the outcomes you desire, are you focused on your goals and dreams, are you aware of what is working and what is not, do you have the right people around to support and inspire you, are resilient in your efforts, do you have the courage to go after what you want, do you have the physical energy and mental stamina to perform at your best and are you able to influence those around you to support you and be a part of what you want to create in your life?

If you answered NO to any of these questions, make sure you download and follow my 7-Day Mini Transformation Program. It will definitely give you tools and strategies to get your journey started and moving in the right direction.